This event will be held via Zoom. Please register to attend. 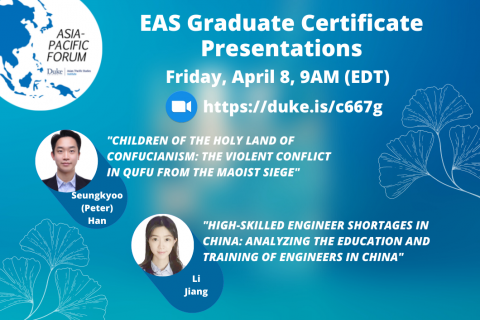 This thesis focuses on the violent conflict in Qufu, the Holy Land of Confucianism in Shandong province, especially the tension between the youths of the Maoist siege (i.e., anti-Confucians) and Pro-Confucians during 1966 and 1967. While scholarships have been accumulating, especially regarding violence and chaos during this period, the case in Qufu, however, shows a lack of study about the conflict between the Red Guards and local resistance. This study addresses the puzzle of (1) how aggressive the Red Guards were, and why, in destroying Qufu's Confucius relics? (i.e., Anti-Confucian), (2) who were the ones in Qufu trying to protect the Confucius Temple, and why? (i.e., Pro-Confucian), and (3) what was the aftermath of the siege, and what did it reveal about the tension during the Cultural Revolution between the anti-Confucians and the pro-Confucians? This paper examined different types of empirical data, including mortality rate, demographics, interviews, and other studies of the Cultural Revolution. The study finds that although the Red Guards burned most Confucian relics, no casualties in Qufu have been recorded. Also, the violence against the Qufu was a new type of brutality from outside Red Guards as active agents of the campaign against the Four Olds for political reasons. The crises in Qufu, from 1966 to 1967, give a new framework for a distinction between Anti-Confucianism and the Cultural Revolution. The study concludes that the case in Qufu shows a unique tension between the Maoist siege and Pro-Confucian, which led to introducing a notion of 'Qufu Exceptionalism,' namely, presents an ability to survive in a series of crises in China and provides reasons why this case shows an extension of Qufu Exceptionalism.

We are entering the fourth industrial revolution, from the Internet Age to the Artificial Intelligence Age. To win the global competition in the fourth industrial revolution, the high-skilled engineer is one of the critical resources for every country. However, in China, even though the government has enacted a series of Talents Policies since 1996, China still encountered a high-skilled engineer shortage. The Ministry of Education (MOE) pointed out that this shortage is partly caused by "the coexist of structural surplus and shortage of engineering graduates." Based on engineers' supply and demand analysis, this paper identifies five factors that drive the high-skilled engineer shortage. First, the supply of engineers in the emerging industries has not yet caught up with the demand. Second, China lacks high-quality faculty. Third, the promotion system may influence young engineers' motivation. In addition, a case study of emerging industries in Shanghai suggests that there are some skill mismatches between education and the emerging industry. Finally, the case study also suggests that labor mobility plays an important role in recruiting high-skilled labor. To help MOE reduce the engineer shortage, I recommend that MOE strengthen the practical course in undergraduate engineering education.
This event will be held via Zoom.  Please register to attend.