Blood Letters: The Untold Story of Lin Zhao, a Martyr in Mao's China

Blood Letters is the first authoritative biography of Lin Zhao, a poet and journalist executed in 1968 at the height of the Cultural Revolution. The only Chinese citizen known to have openly and steadfastly opposed communism under Mao, she rooted her dissent in her Christian faith and expressed it in long prophetic writings done in her own blood, at times on her clothes and on cloth torn from her bed sheets. Miraculously, Lin Zhao's prison writings survived, though they have only recently come to light. Drawing on these works and others from the years before her arrest, as well as interviews with her friends, her classmates, and other former political prisoners, Xi Lian tells the story of a young woman whom the late Noel Peace laureate Liu Xiaobo called "the only voice of freedom left for contemporary China".

Xi Lian is a Professor of World Christianity at Duke University's Divinity School. Professor Lian's research is focused on China's modern encounter with Christianity. His first book, The Conversion of Missionaries (1997), is a critical study of American Protestant missions against the backdrop of rising Chinese nationalism in the early twentieth century. His second book, Redeemed by Fire: The Rise of Popular Christianity in Modern China (2010), winner of the 2011 Christianity Today Book Award, examines the development of missionary Christianity into a vibrant, indigenous faith of the Chinese masses. 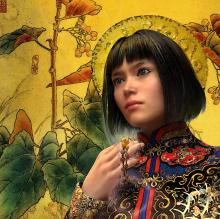