Corporeal Cross-species Entanglements: Refraining from Killing and Releasing Life in the Edo Period 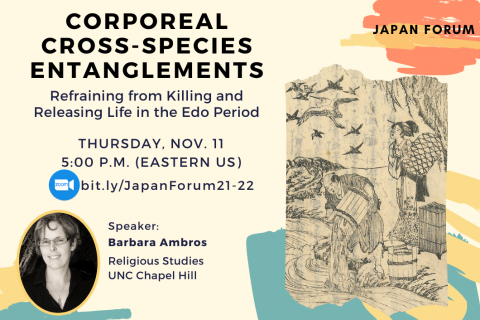 Ritual animal releases have a long history in Japan beginning in the seventh century, approximately two centuries after such rituals arose in China. From the mid-eighth century, the releases became large-scale state rites conducted at Hachiman shrines, which have been most widely studied and documented. By contrast, a different strand of life releases that emerged in the Edo period owing to the influence of late Ming Buddhism has received comparatively little scholarly attention despite the significance for the period.

Not only may the publication of a Sino-Japanese edition of Yunqi Zhuhong's Tract on Refraining from Killing and Releasing Life in 1661 have been an impetus for Shogun Tokugawa Tsunayoshi's Laws of Compassion in the late-seventeenth century, but also approximately thirty Japanese Buddhist texts inspired by Zhuhong's Tract appeared over the next two and a half centuries. In addition to highlighting soteriological considerations, these early modern Buddhist tracts emphasized the importance of protecting and prolonging animal lives.

The authors developed a complex ethic of refraining from killing and releasing life that stressed the bodily connections between humans and animals, and they used affect to trigger human compassion toward other living beings in order to generate vital karmic benefits in this and future existences and establish a well-ordered cosmos.