The Crown, the Capitalists, and the ‘Milk Tea Alliance’ in Thailand 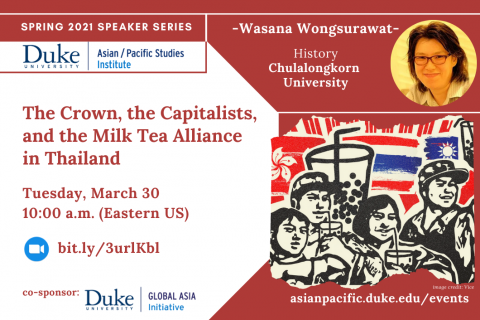 In her 2019 book, "The Crown and the Capitalists: The Ethnic Chinese and the Foundation of the Thai Nation," Prof. Wasana Wongsurawat (History, Chulalongkorn University) explored the history of ethnic Chinese diaspora contributions to the development of modern-day Thailand.

In this talk, she will outline how this community has been affected by and influenced recent events, including the tense relationship between supporters of the PRC and progressive netizens who transformed an internet meme into a symbol of regional solidarity advocating democracy across Southeast Asia: the "Milk Tea Alliance."

Abstract:
Siam became the only Southeast Asian state not to be fully colonized by the West because the Siamese ruling class took advantage of the colonial structure, mimicked British colonial officers, and self-colonized their own kingdom to serve the economic purposes of the British Empire. The Siamese monarchs managed to carry out this ingenious scheme of self-colonization with the cooperation and support of the ethnic Chinese capitalist class, the richest among whom enjoyed extraterritorial rights as colonial subjects. They served as the crown’s business agents and connected the Siamese economy with the extended and highly influential ethnic Chinese trade network across the South China Sea. In return, they became the privileged class in Siam, many marrying off daughters and grand daughters into the royal family, merging the Chinese economic elite as one and the same with the royalist political elite.

Consequently, Thailand is the only country in Southeast Asia that remains stuck in the colonial era to the present day. In the same way that the US replaced Britain as the patron of the Thai political elite throughout the Cold War years, China has become the new patron state of Thai dictatorial regimes of the 21st century. The Milk Tea Alliance is the last wave of decolonization in Asia. It allows the Thais to join other peoples of Asia whose decolonizing efforts have been delayed and prolonged into the 21st century. Hong Kong and Taiwan’s struggle for democracy and independence is also a long overdue struggle to end, once and for all, the colonial narrative in East and Southeast Asia.

**If you require captioning assistance, please contact APSI (apsi@duke.edu) no later than March 16, 2021.**