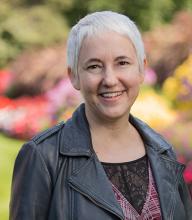 Recent work in political and cultural theory has questioned how corruption has come to be conceptualized as a lingering state of unlawfulness and opaqueness that operates as a foil for the modern and the liberal (Sengupta, Chatterjee, Chua). I put this theoretical work in dialogue with speculative fiction that addresses 20th-century histories of militarized global restructuring (Octavia Butler, Cixin Liu, and others). I argue that the cultural texts identify (and intervene into) discourses of corruption and transparency without buttressing liberalism as the bottom line for political interventions with the perceived end of Pax Americana (Sakai). In this sense, they can be mobilized as resources for transnational political thought in increasingly illiberal times.

Amie Elizabeth Parry teaches in the English Department of National Central University, Taiwan, where she is also a core member of the Center for the Study of Sexualities. Her books include Interventions into Modernist Cultures: Poetry from Beyond the Empty Screen, which received the Book Award in Literary Studies from the Association for Asian American Studies in 2009, and Penumbrae Query Shadow: Queer Reading Tactics (in Chinese), jointly written with Naifei Ding and Jen-peng Liu after ten years of collective research projects. Currently, she is a fellow at the Society for the Humanities, Cornell University, participating in an interdisciplinary, in-residence research group on the topic of corruption.

This is the first event of the Spring 2018 APSI Speaker Series. Download an event flyer (.png version available).