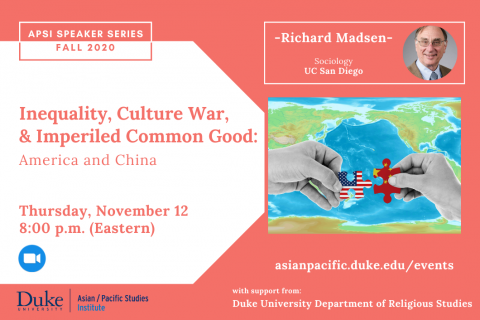 Despite rising inequality, daily life in both America and China is afflicted more by culture conflicts than class struggle. Richard Madsen (Sociology, UC San Diego) argues here, however, that in both societies, these cultural conflicts are connected with rising inequality, and indeed in their current intensity are a manifestation of it. A simple Marxist explanation for this would be that ruling elites foment conflicts over culture to distract the masses from becoming mobilized against the rich.  While he doesn’t doubt that this is some part of the story, he will argue that there is another important part, the social foundation for elite manipulation. Rather than drawing on Marx, he will invoke Max Weber’s account of the cultural conflicts of modernity.

Max Weber described the modern moral condition as beset by irreconcilable tensions between competing values. But here Prof. Madsen will see the conflicts as embedded in distinct kinds of communities, both communities of everyday life and “imagined communities” extending, with the aid of modern media, the experiences of daily life into a “social imaginary” of encompassing communities embodying different facets of ordinary life. The moral conflicts people face are the result of being pulled by competing social pressures from these communities.

The way “imagined communities” are envisioned depends on the communities of everyday life.  Using Mary Douglas’s account of such languages, he distinguishes between elaborated and condensed codes, the former prevalent in closed communities predominantly structured through kinship, the latter in open communities structured according to universal rules.

Rising inequalities lead to a bifurcation of such communities and to a polarization of the languages that express cultural values. This happens in both the USA and China, but at present the polarization is more intense in the USA. In neither case however is the situation sustainable over the long run. US-China dialogue might productively address, not cultural differences, but the effects of rising inequality on cultural conflict within both societies.

Registration is required for this online (Zoom) event.

November 9-13, 2020 is International Education Week at Duke. Be sure to check out other exciting events taking place during Duke's IEW 2020 celebration.