A Long Environmental History of the Loess Plateau: Conflict, Extraction and Intensification Between Biomes

This is a hybrid event; online attendees should register via Zoom >> 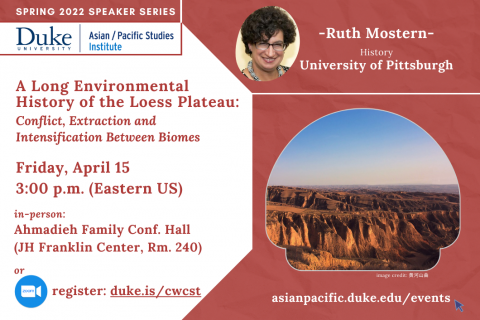 The Loess Plateau is a tectonic block surrounded by the Yellow River and comprised of the world's largest formation of loess soil. Loess, a silt-like sediment that accumulated in the region over the past two million years, has excellent drainage capacities when it is covered with vegetation, but is highly prone to erosion when ground cover is removed. The loess plateau also receives unpredictable amounts of rainfall each year and becomes significantly more arid from south to north.

These two characteristics of the Loess Plateau - its unpredictable rainfall and its propensity to experience erosion - have both had profound effects on its long term history. At various times, the loess plateau has been a site of imperial capitals and state-sponsored colonization; a highly fortified frontier encompassing multiple polities and modes of subsistence, and a focus for commercial extraction of timber, salt, and other commodities.

This talk explains how the Loess Plateau has shaped, and has been shaped by, a range of human activities over the past three thousand years.

About the speaker:
Ruth Mostern is Associate Professor of History and Director of the World History Center at the University of Pittsburgh. She is the author of The Yellow River: A Natural and Unnatural History (Yale University Press, 2021) and Dividing the Realm in Order to Govern: The Spatial Organization of the Song State, 960-1276 (Harvard Asia Center, 2011). She is also the Project Director of the World Historical Gazetteer, an award winning digital humanities platform for integrating information about historical place names.