This is an online event; attendees should register via Zoom >> 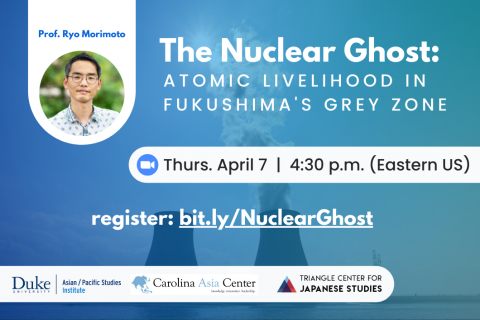 How can people die well in the postfallout world? Alternatively, how do people live and live well in the protracted aftermath of radiological danger, alongside the heightened awareness of their undeniable copresence with contaminants?

Exploring these questions, The Nuclear Ghost exposes the readers to the more-than-biological harms of nuclear fallout, which is overshadowed by our collective enchantment with radiation exposure and its much-expected adverse effects. By acknowledging the invisibilized nuclear ghost that dwells outside of the thresholds of the technoscientific gaze, Morimoto analyzes the struggles of representing and experiencing low-dose radiation exposure in Fukushima, where individual, social, political, and scientific determinations of the threshold of exposure are often inconsistent.

Morimoto offers the analytic of "half-life politics" in order to explicate the violence of the radiation-centered approach. Half-life politics foreground the presence and absence of radiation in the environment and radiation's potential harm on humans and places it above all other things, such as the residents' quality of life, cultural continuity, personal belongings, sustainability of livelihood, and biodiversity.

The talk highlights how the threat of low-dose radiation is not only biological; the uncertainty of its impacts also disintegrates the social, cultural, and political fabric of the community and divides people morally, ideologically, and economically.

About the speaker:
Ryo Morimoto is a first-generation scholar from Japan. His scholarly work addresses the planetary impacts of our past and present engagements with nuclear things. Regionally centered on Japan, his research creates spaces, languages, and archives through which to think about nuclear things, along with other not immediately sensible contaminants, as part of what it means to live in the late industrial and postfallout era.

Since 2020, Morimoto facilitates an undergraduate-led project, Nuclear Princeton, which highlights the underacknowledged impacts of Princeton's nuclear science and engineering on Native lands, communities, and beyond.