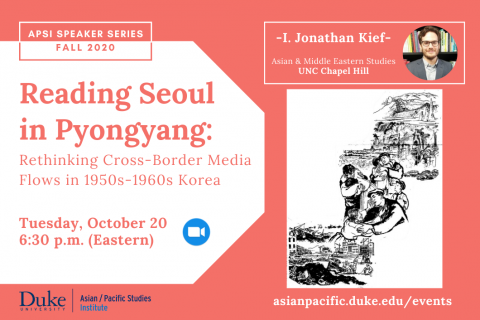 In this talk, I. Jonathan Kief (Asian & Middle Eastern Studies, UNC-Chapel Hill) offers a revisionist perspective on the relationship between writers in North and South Korea during the 1950s and 1960s. Although it is generally assumed that the division of the Korean peninsula in 1945 produced two mediascapes that developed in relative isolation from each other, a careful reading of contemporary sources demonstrates otherwise.

Drawing upon a range of textual sources from the literary, cultural, and journalistic domains, Kief outlines the surprisingly robust reception that South Korean publications received in North Korea in the 1950s and 1960s, and explores the practices of cross-border writing that this reception engendered: in particular, the writing of open letters directed toward the South, the creative adaptation of South Korean journalistic texts, and the rewriting of works of South Korean literature.

In the North, he argues, the connections between North and South Korean publications became stronger rather than weaker over the course of these years, producing imbricated rather than bifurcated mediascapes.

Finally, linking these real as well as imagined engagements to contemporary exchanges between the two Koreas and Japan, he suggests an alternative, regional way of thinking about national division in Korea during these decades: one that reframes our understanding of the Cold War order in terms of the novel modes of interaction – rather than rejection – that it produced.

About the speaker: Prof. I. Jonathan Kief is a scholar of modern Korean and comparative literature specializing in North and South Korean fiction and criticism of the mid-twentieth century. His research interests include global and regional histories of Cold War culture, colonial and postcolonial Korean-Japanese literary and intellectual exchanges, translation studies, the Korean diaspora, and interactions between texts, images, and broadcast sound. He is currently working on a manuscript titled "Toward the Round Horizon": Cross-Border Reading and Writing in the Cold War Koreas, which explores interactions between North and South Korean literature within broader transnational networks of the 1950s and 1960s.

This event will be held online, via Zoom. Registration is required.

**If you require accommodation for the hearing impaired, please email apsi@duke.edu no later than Thursday, October 15, 2020.**