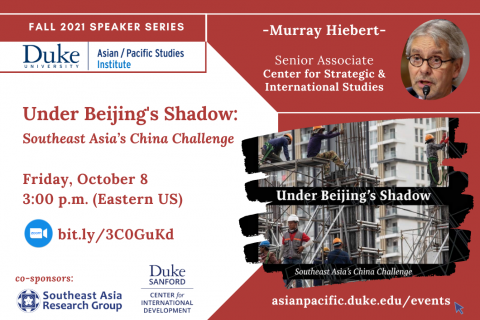 China's rise and stepped-up involvement in Southeast Asia have prompted a blend of anticipation and unease among its smaller neighbors. The stunning growth of China has yanked up the region's economies, but its militarization of the South China Sea and dam building on the Mekong River has nations wary about Beijing's outsized ambitions.

Join Professor Edmund Malesky as he interviews Murray Hiebert, author of Under Beijing's Shadow: Southeast Asia's China Challenge, discussing the undercurrents lying beneath the surface of China's relations with its smaller southern neighbors, as well as the ways these countries could address the "China Challenge."

About the speaker:
Murray Hiebert is the head of research for the strategic consulting firm Bower Group Asia and a senior associate of the Southeast Asia Program at the Center for Strategic and International Studies (CSIS) in Washington, D.C. Hiebert's latest book, Under Beijing's Shadow: Southeast Asia's China Challenge, was published in mid-2020. Hiebert earlier served as senior adviser and deputy director of the CSIS Southeast Asia Program. Prior to joining CSIS, Mr. Hiebert was senior director for Southeast Asia at the U.S. Chamber of Commerce. Earlier, he was a journalist in the China bureau of the Wall Street Journal. Prior to his posting to Beijing, he worked for the Wall Street Journal Asia and the Far Eastern Economic Review in Washington, reporting on U.S.-Asia relations. From 1995 to 1999, he was based in Kuala Lumpur for the Far Eastern Economic Review. In the early 1990s, he was based in Hanoi for the Review. He joined the Review's Bangkok bureau in 1986, covering developments in Vietnam, Cambodia, and Laos.

Register for this event on Zoom >>