What China's S&T Modernization Means for the U.S.: A Strategic Perspective 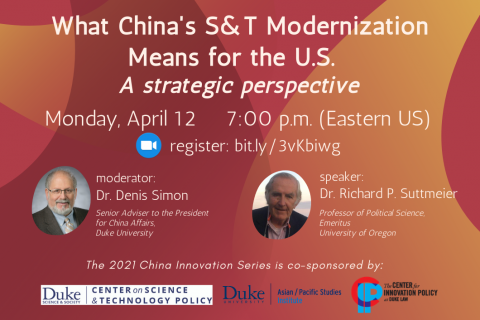 The impressive rise in China's capabilities in science, technology and innovation (STI) raises important questions for the United States and other countries. Chinese progress is rightly seen as providing it with material and intellectual resources to challenge US economic and national security interests. But, after more than four decades of close US-China cooperation in science and technology, it also presents the US with a mixed set of opportunities as well as challenges.

This talk will attempt to inventory the state of US-China S&T relations and suggest a menu of initiatives for the US to adopt in order to secure its strengths as an STI power.

About the speaker:
Richard P. Suttmeier is a Professor of Political Science, Emeritus, at the University of Oregon. He has written widely on science and technology development issues in China. Dr. Suttmeier has served as Senior Analyst, Office of Technology Assessment and Director of the Beijing Office, National Academy of Sciences/Committee on Scholarly Communication with the People's Republic of China. He has held consultancy positions with the World Bank, the UNDP, and the US, Canadian and Chinese governments. During 2010-11, he served as a Senior Visiting Scholar at the Institute of Policy and Management of the Chinese Academy of Sciences. He holds the A.B. from Dartmouth College and the Ph.D. from Indiana University.

About the moderator:
Fluent in Mandarin Chinese, Simon has more than four decades of experience studying business, competition, innovation and technology strategy in China. In 2006, he was awarded the China National Friendship Award by Premier Wen Jiabao in Beijing. Prior to returning to Duke, Dr. Simon served as Executive Vice Chancellor at Duke Kunshan University in China (2015-2020). Simon’s career included spells as senior adviser on China and global affairs in the Office of the President at Arizona State University; vice-provost for international affairs at the University of Oregon; and professor of international affairs at Penn State University’s School of International Affairs. He also has had extensive leadership experience in management consulting having served as General Manager of Andersen Consulting in Beijing (now Accenture) and the Founding President of Monitor Group China.

***If you need a disability-related accommodation, please contact: xiaojuan.ping@duke.edu by April 5, 2021.***