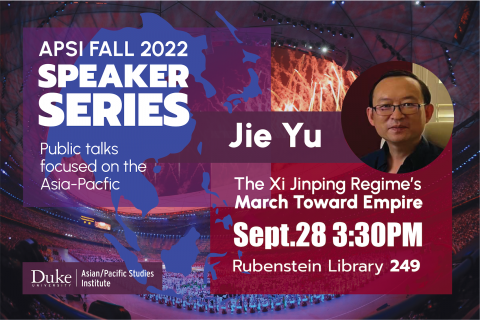 As a human rights activist and public intellectual committed to defending freedom of speech and of religion, Yu Jie was among the earliest pundits to sound the alarm of Xi Jinping's march toward empire.

In Yu's view, under Xi Jinping, the Chinese Communist Party has downplayed its identity as a Marxist-Leninist party and recast itself as a Fascist, ultranationalist party. By invoking the celestial imperial order of China's past, the Xi Jinping regime is attempting to challenge and replace modern Western liberal, democratic values. The West needs to muster both its hard power and its soft power to confront him.

About the speaker: Yu Jie, exiled Chinese writer, is the author of more than 30 books, including a biography of the Nobel Peace laureate Liu Xiaobo and a critical volume each on Hu Jintao, Wen Jiaobao, and Xi Jinping. A New York Review of Books article calls him "one of China's most prominent essayists and critics." In the 2000s, he was active in the Chinese dissident movement, and was arrested and tortured.

In 2012, Yu emigrated to the US with his family. During the last decade, he has continued to write regularly for several Chinese-language media outlets in North America and Taiwan, including Radio Free Asia. This talk will be offered in a hybrid format to allow for remote viewing via Zoom. Registration is required (https://duke.is/8sjwa).