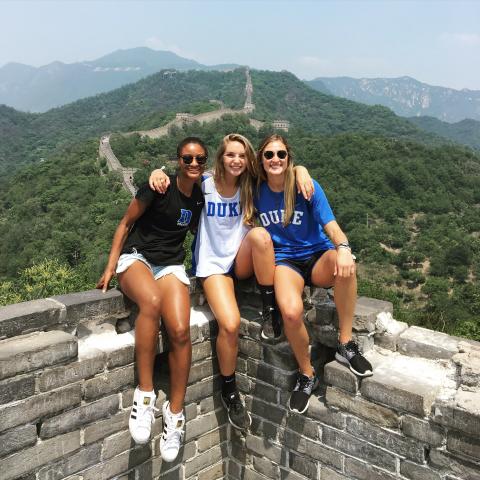 For additional opportunities, explore funding for all Duke students.

All APSI scholarships are subject to Duke's Global Travel Policy.

Undergraduate students needing assistance to cover travel expenses for presenting on East or Southeast Asian topics at conferences and professional meetings may apply for up to $700 from APSI. Awards will take into account funds received from other Duke sources.  Students enrolled in the Undergraduate Certificate in East Asian Studies are given preference for funding.

Applications are accepted until the annual funding allocation is depleted. Students are encouraged to apply as soon as they receive notice of their paper or presentation acceptance; applications must be received at least 30 days prior to the start of the conference or meeting.

Applications should be submitted to Alex Nickley.  Travel grants take the form of reimbursement of actual expenses and require submission of receipts.

This grant supports student projects with the goal of furthering Asian-American understanding, as well as funding need-based grants for students to study in Asia. Duke undergraduate and graduate students may apply. The award maximum is $2,500. Learn more about Janet B. Chiang, Trinity '86.

Special consideration will be given to projects connected with Asian-American relations, Asian American cultural or legal issues, and women's issues, but any project designed to meet a need and which encourages student leadership initiative will be considered. Special consideration will also be given to Asian Americans who apply for grants to study in Asia, but all students with a demonstrated interest in the relation of Asian and American cultures are encouraged to apply for this grant.

Applications for 2023 will be due no later than 5:00 p.m. on March 5, 2023. The same form may be used by both graduate and undergraduate students; if applying as a graduate student, include your expected year of graduation on the same line as your major (program name). Applicants must include a basic budget and list all other sources and amounts of funding (including applications for funding).

If the application is associated with a research project involves human subjects, submit evidence that the project has been submitted for Duke Campus IRB review (submit verification if already approved or exempted). Funding will not be released until IRB approval (or exemption) is obtained. **IRB approval is not required if the application is to support language study.**

Visit the All Duke Students page for additional details and application instructions.

This prize honors Dr. Kristina Kade Troost, who had a distinguished career spanning 30 years at Duke. A historian by training, Dr. Troost was Duke’s first Japanese Studies Librarian and headed the International and Area Studies Department in the Library for 20 years. She also served as the much-beloved Director of Graduate Studies for the MA program in East Asian Studies at Duke and continues to be actively involved in the Triangle Forum for Japanese Studies. Through her various roles, Dr. Troost made invaluable contributions to East Asian Studies at Duke and beyond.

The purpose of the Kristina Troost Prize is to recognize the best undergraduate project in East Asian Studies at Duke. The project can be in the form of a substantial paper, visual art, film, or digital production, among others. The prize ($450) will be awarded annually by an APSI faculty committee and given in the spring semester.

To be considered for the prize, submit the application form, a copy of your project, and a nomination letter from a faculty member who supervised the project. Applications for the 2022-23 academic year will be due no later than 5:00 p.m. on May 1st, 2023.

Limited scholarships of up to $7,000 are available to full-time Duke students who plan to pursue further language training in Chinese, Japanese or Korean either in East Asia or at a reputable domestic program. Priority is given to students at the intermediate level or above who 1) wish to continue language study beyond university/departmental language requirements 2) are enrolled in the East Asian Studies Graduate Certificate, Undergraduate Certificate or MA program and 3) articulate a clear understanding of how the specific program they intend to enroll in will help them meet their language proficiency and broader academic goals.

On September 1, 1983, Sirena WuDunn, en route to Hong Kong for a year of study, was aboard Korean Airlines flight 007, which was shot down by Soviet fighters. Since then, the WuDunn family has worked with Duke students and administrators to endow a scholarship in honor of her life.

The award is not need-based; however, should the recipient be on financial aid, the amount of the scholarship will be used to reduce the self-help portion of the financial aid award. The award is given to the student(s) who best embody the ideals and interests that Sirena held. Preference for the award will be given to students who:

Applications for 2023-24 will be due no later than 5:00 p.m. on March 5, 2023. As part of the application a faculty letter of recommendation will be required.  Recommenders can submit their letters directly to apsi@duke.edu. This is a grant for an academic-year award and cannot be used for summer programs.

Full-time Duke sophomores and juniors may receive up to $2,500 to conduct research in China, Japan, Korea, or Southeast Asia. Priority will be given to students who 1) will conduct research for a senior thesis; 2) whose projects have a high probability of developing into a senior thesis; 3) who have done some preliminary work and have arranged affiliations with local institutions for the research; and 4) are enrolled in the Undergraduate Certificate in East Asian Studies program. Applicants must include a basic budget and list all other sources and amounts of funding (including applications for funding). If the research project involves human subjects, submit evidence that the project has been submitted for Duke Campus IRB review (submit verification if already approved or exempted). Funding will not be released until IRB approval (or exemption) is obtained.