Three months, three books, three discussions. As global events triggered profound shifts in many summer plans, APSI offered a collegial respite with a summer book club. In June, July, and August, members of the extended APSI community were openly invited to take a break from some of their daily concerns and consider new perspectives. Although all of the books were based in Asia, this mini-series ranged in style from biography to fiction, touching on universal themes of religion, freedom, community, family, identity, immigration, and environmental degradation.

Blood Letters: The Untold Story of Lin Zhao, A Martyr in Mao's China

To begin APSI's summer 2020 book club discussions, Dr. Xi Lian, David Steinmetz Distinguished Professor of World Christianity at Duke, generously provided insight into the research methods and inspiration behind his groundbreaking biography of Lin Zhao. First published on the 50th anniversary of her execution, Blood Letters explores the life and times of a Chinese citizen who came to openly and steadfastly oppose communism under Mao Zedong. Particularly unique was the way in which she rooted her dissent in a fervent Christian faith—expressing her beliefs in lengthy declarations often written from prison in her own blood.

The candid and thought-provoking discussion, held via Zoom, raised many questions about this little-known figure who started life in a relatively comfortable situation, grew enamored of the Chinese Communist Party's revolutionary ideology, then paid the ultimate price for courageously renouncing the movement's charismatic leader when he diverged from what she believed was the true path forward for her country. For many of the book club's participants, this book was their first encounter with Lin Zhao, and Prof. Lian recommended additional resources for those wishing to further engage the subject.

Although the book was grounded in China's historical and cultural context, many of the underlying themes were universal and participants found it easier than anticipated to relate their own life experiences as well as current events. Courage was frequently mentioned in the ensuing discussion—the courage to profess one's own beliefs in the face of social or familial opposition, the courage to speak truth to power, and the courage to face the consequences for standing up even when it meant being hammered down.

Professor Hae-Young Kim (Asian & Middle Eastern Studies, Duke) led a spirited group discussion of Min Jin Lee's Pachinko, a multi-generational saga of a Korean immigrant family in Japan. The book was a finalist for the 2017 National Book Award and it tells the story of Sunja, a fisherman's daughter, as she accompanies her husband to Japan and raises her children in a new land. The Tuesday afternoon conversation reflected on questions of identity, heritage, and belonging that also spoke to the Asian-American immigrant experience. Although outwardly more similar in appearance to the majority population than Black and Latinx communities in the United States, Koreans in Japan have faced historic discrimination and nearly perpetual second-class citizen status. To become Japanese meant legally and socially giving up one's Korean identity, a complex trade-off that was exacerbated for many overseas Koreans by the subsequent division of the Korean peninsula following the end of World War II.

Another major theme of the book that emerged during the group discussion was the vivid portrayal of female and male characters. Although both Korean and Japanese societies are largely patriarchal, many attendees remarked at the strength of the book's female characters in particular. The majority of the men in the book struggled more openly with social institutions and fate, yet it was the resilience of their female relatives that enabled the families to endure hardship and persevere through difficulties of occupation, war, reconstruction, and the need to begin again in a new place.

The Man With the Compound Eyes

We rounded out our series with a discussion on Taiwanese novel The Man with the Compound Eyes by Wu Ming-Yi. This incredible book chronicles the lives of a diverse cast of characters struggling to navigate a precarious existence in times of ecological collapse. Wu makes use of real-life phenomena—like the Great Pacific Garbage Patch, sea-level rise and Catacean Stranding—to bind his protagonists inextricably with the environment. Interconnectedness is both transcendent and, at times, deeply tragic.

Duke professors Eileen Chow and Carlos Rojas, both renowned translators and scholars of Chinese fiction, introduced the novel and got participants thinking about key themes. What do we gain from an archipelagic view the novel offers? How does the novel portray consumption and address the novel itself a consumable product? Does the novel provide new ontological insights or allow the reader to “see otherwise” from non-human eyes? Joining from the Center for Latin American and Caribbean Studies Miguel Rojas-Sotelo broadened the conversation to include a comparative perspective. Issues of indigeneity and environment are not unique to the island of Taiwan, after all.

Over the hour and a half conversation many the twenty participants chimed in with their own keen interpretations and probing questions. Participants came not only from Duke but also UNC and the general public. UNC faculty member Robin Visser shared anecdotes from meeting both Wu Ming-Yi and the translator Darryl Sterk. In book club fashion, the conversations went deep and the sharing of ideas opened the text to new possibilities. 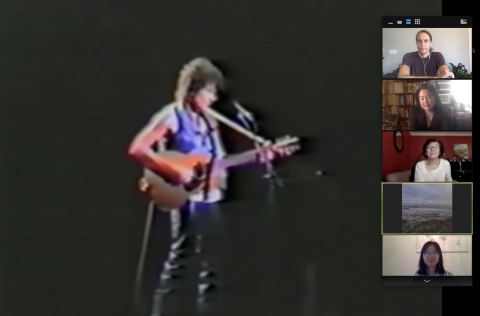 As the discussion came to a close, Miguel Rojas-Sotelo ushered in a surprise "guest appearance" by the incomparable Bob Dylan, winner of the 2016 Nobel Prize for Literature, with a video clip of a performance of his song, A Hard Rain’s Gonna Fall. The lyrics were quoted heavily toward the end of the novel as Wu’s characters found themselves staring out at a boundless sea, their road submerged by rising water.

Despite the heavy content, Wu’s novel was a great one to wrap up our first annual East Asian Studies Summer Book Club featuring authors from East Asia and Asian diaspora communities. We’d like to thank all the faculty members who led the conversations and, of course, the many participants who enriched our shared understanding of the books we read together. Until next summer...