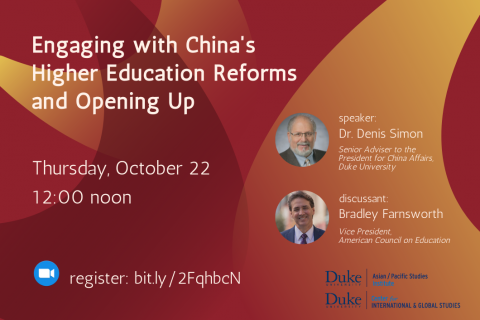 “Globalism was designed precisely to … show sufficient deference for and understanding of your roots, your home culture while at the same time being engaged globally and enhancing your global awareness.” - Dr. Denis Simon, quoting Liu Jingnan, the first chancellor of Duke Kunshan University

On October 22, 2020, Dr. Denis Simon, a Senior Adviser to the President for China Affairs and Professor of the Practice at Duke University's Fuqua School of Business, presented a detailed overview of China's overall higher education system and provided an analysis of on-going Chinese initiatives to enhance the quality and performance of its domestic universities. In addition to sending thousands of students abroad annually, one of the major ways through which China has expanded its educational opportunities is through joint ventures with programs and schools at universities in the U.S., Canada, and Europe.

Drawing insights from his nearly six years of experience (2015-2020) as the Executive Vice Chancellor of Duke Kunshan University (DKU), Dr. Simon thoughtfully examined the growing tensions between China’s stated desire for greater openness and international cooperation in the higher education sphere with the parallel, and sometimes competing, desire for Chinese universities to fully embrace the nationalist ideas of Xi Jinping and to deepen the role of the Chinese Communist Party in university affairs.

The presentation concluded with Dr. Simon’s assessment about what it will take for China to succeed in its efforts to become an education powerhouse in the 21st century. An emphasis on developing research universities that would serve as a vanguard of a world-class higher education system and draw leading scholars and faculty from around the world to help bolster Chinese universities. Another component of the plan was to slow, or even reverse, the “brain drain” and to recruit and entice Chinese nationals who were educated at top universities abroad into returning home and strengthening the country’s status as an innovation-driven nation. Dr. Simon pointed out that China faces a critical demographic challenge in the coming decades, and posited that broadening international cooperation and opening China’s education system is a key element for success in an increasingly difficult international environment.

After the presentation, the event discussant, Brad Farnsworth, vice president of the American Council on Education (ACE), pressed Dr. Simon on some important questions about the value of a liberal arts curriculum in a technology-driven economy, and how China’s global engagement strategy can help it to address any shortcomings as it works to prepare its young people for the demands of the 21st century. He noted that “China remains an enormously complex place with a lot of competition and internal contradictions,” that nevertheless maintains an abiding commitment to global engagement.

Toward the end of the event, the discussion turned towards the role of joint venture programs. Simon referred to his experience at DKU, noting that the institution is only three-and-a-half years old. “It is a culture in the making,” he said. “And so therefore, as it gets made, hopefully it combines the best of all. That's why I call DKU a global university. It really is much more than just a Sino-U.S. joint venture. It embeds things from China, because we are located in China. We have an American partner from Duke, but we really are global in our ambition in our aspiration and only by being global can really accommodate all these different perspectives that are brought to us by the students and the faculty coming from all over the world.”

The webinar was co-sponsored by Duke Asian/Pacific Studies Institute (APSI) and the Duke University Center for International and Global Studies (DUCIGS.)

Watch a recording of the event: