On October 28, 2020, APSI hosted the first ever Duke Study in China (DSIC) Virtual Alumni Reunion. Over 40 alumni from a dozen different cohort years, stretching back to the very first class in 1982 to the most recent in 2019, gathered via Zoom to connect, catch up, and share memories. Alumni were welcomed to the event by Amanda Kelso, the Executive Director of Duke’s Global Education Office who acknowledged DSIC as “one of Duke’s longest running programs [abroad]” and praised its immersive and rigorous character.

Ralph Litzinger—well-known China-hand, associate professor of cultural anthropology at Duke, and former director of DSIC (1998)—gave the keynote speech of the reunion. Litzinger started off with an acknowledgement of “dark times” in U.S.-China relations that have been exacerbated by a global pandemic, rise in nationalism, trade and tech wars, and the flaring up of anti-Asian racism in the U.S., to name a few. He then fondly recalled the year he directed the DSIC program in 1998. During that time, he saw “29 students come together in incredibly challenging times and build friendships.” Litzinger compelled the alumni to remember what initially drew them to China and recapture the relationships that have sustained them. Through connecting with old classmates and reflecting on the past, Litzinger suggested, we can find new sources of optimism for the future. 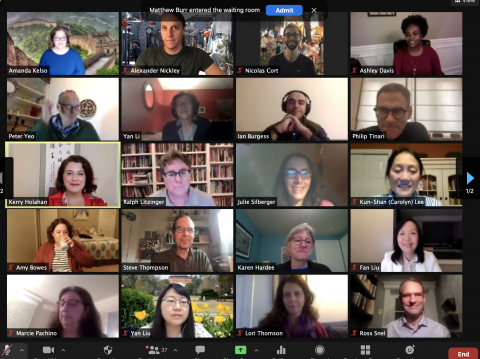 Litzinger’s keynote was followed by a panel discussion by an all-star cast of alumni representing the four decades of the program, moderated by Nicolas Cort (17’, 18’), currently serving as an intern for the Carnegie-Tsinghua Center for Global Policy. After brief introductions, Nicolas called on panelists to reflect on their most vivid memory while participating in the program and comment on the impact the experience had on their current careers.

Peter Yeo (83’), president of the Better World Campaign, noted emphatically that “Duke [Study] in China has fundamentally changed my entire career.” He credits the program with giving him the “passion, credibility and language” to act as an authority on China when discussing matters of diplomacy and how the U.S. should act in bodies such as the UN.

Philip Tinari (99’), director of the UCCA Center for Contemporary Art and an influential actor in the Beijing art scene, got his start from learning language in the DSIC program. Tinari recalled fondly his intimate conversations about politics and identity over home-cooked meals with his faculty advisor during the program, a Hui minority scholar. When asked what role art plays in connecting communities across national and cultural differences Tinari stated: “the more [we] can put great art in front of curious audiences, the more possibilities open up.”

Kerry Holahan (00’), a classical singer and cross-cultural arts consultant, returned to China after graduating from Wesleyan University to spend the next ten years performing and facilitating musical collaborations using her finely tuned language skills and artistic abilities. Holahan understood herself as a “cultural ambassador” and maintained that commitment into the professional world.

Ashley Davis (10’, 11’), now a manager at Apple, discussed how her experiences in Kunming actively molded her own sense of identity as an African American woman. Davis recalled walking down the street with a diverse cohort of classmates that were constantly approached by curious onlookers. These sometimes uncomfortable encounters led to a better sense of self and stronger empathy for others that she was able to leverage while working for Apple Inc. in China.

Ian Burgess (17’, 18’) reflected on his independent travels during the program which took him to inner-Mongolia via train. The nine-hour ride on infamous yingzuo or “hard-seater” car opened up an opportunity for him to engage with locals “trading snacks and chatting about life.” For Ian, that was the first time he knew he could have a meaningful conversation on his own, far away from teachers and classmates. As an intelligence officer in the US Air Force, Ian hopes to draw on his strong language skills and experience on the ground to inform a healthy military policy that maintains a fair playing field in the region, especially in disputed areas such as the South China Sea.

In proper Zoom fashion, the event wound down with a series of breakout room mixers following the stimulating panel discussion. There, alumni were able to converse informally and share stories from their past experiences. The event was lauded by alumni as “highly successful” and has even inspired spin off reunions along cohort years. APSI hopes to build on the momentum of the reunion to offer further avenues for our 1,500-strong alumni network to stay connected. U.S.-China relations may currently be in a nadir but the diverse community of DSIC alumni continue to draw from their myriad experiences and linguistic prowess to engage across difference. Here’s to hoping for a brighter year in 2021.