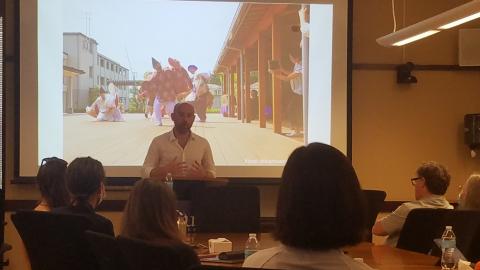 Andrew Littlejohn, Assistant Professor at the Institute of Cultural Anthropology and Development Sociology of Leiden University, visited Duke University and met with students and faculty in an extended series of conversations about how communities around the globe are struggling to adapt in the face of catastrophic events, including drought, wildfire, and floods that are exacerbated by climate change.

The core question motivating his current research is how to live more sustainably in a world damaged not only by intensifying hazards but also the technologies we develop to mitigate them. His current book project, After the Flood, examines these issues in the context of Japan's 2011 tsunami and its aftermath.

After Japan's 2011 tsunami, many survivors resisted attempts to protect the coastline through new infrastructure such as seawalls and tetrapods, which tend to be the government's (and construction industry's) preferred method of damage mitigation. This talk asked why people who had experienced disaster refused things that should prevent it from happening again, tracing the devastating personal losses that the cement infrastructure are ill-equipped to prevent.

Littlejohn draws on extensive field research to demonstrate that these previous efforts to harden coastal edges have, ironically, undermined the very environments they claim to protect. Drawing on alternatives proposed by survivors of the 2011 tsunami, he asks how we might "ecologize safety" instead, by learning from prior adaptations that exist in nature. Expanding pathways to higher ground used by animals, regrowing underwater kelp forests, and limiting development in coastal floodplains are just a few of the measures that could be taken to reduce damage and save lives in the event of a future tsunami.

This first event in APSI's Fall 2022 Speaker Series was co-sponsored with the Department of Cultural Anthropology.