Over the past several years, U.S.-China relations have dramatically risen in public discourse while simultaneously deteriorating in diplomatic terms. Areas of tension include bilateral and multilateral trade, security, and regional as well as global hegemony. 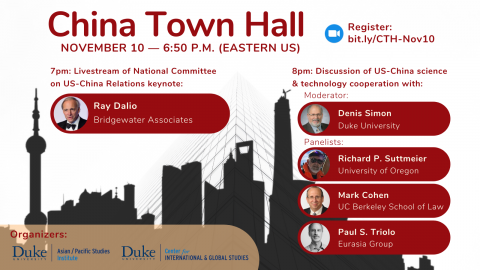 Enter the CHINA Town Hall, an annual event organized by the National Committee on U.S.-China Relations (NCUSCR). The purpose of the Town Hall is to connect leading China experts for “a national conversation on the implications of China’s rise on U.S.-China relations and its impact on our towns, states, and nation.” This year saw multiple transitions for this marquee discussion, including an expansion from a single night to a multi-night series of programs and a shift to a predominantly online format.

The kickoff this year was a keynote on November 10 by Ray Dalio, the renowned investor, philanthropist, and New York Times best-selling author. He was joined in conversation by Stephen A. Orlins, president of the NCUSCR since 2005, and a former managing director of Carlyle Asia and chairman of the board of Taiwan Broadband Communications. The two also responded to an array of questions that had been submitted in advance by individuals from across the U.S.

Economics major Blake McCann noted in a response paper that, “the dialogue about the evolution of empires going back centuries and anecdotes about typical precursors to a nation both becoming the financial center of the globe and possessing the world’s primary reserve currency from Dalio was intriguing. It is even more interesting that it seems like China is showing glimpses of possibly entering this stage and potentially dethroning America.”

As Simon noted, the panel brought a collective 150(+) years of experience to bear on the subject of S&T cooperation between the two countries. The conversation began with a reflection on the state of the relationship now and contrasted the current state of affairs with the period of time 5-6 years ago.

Suttmeier, widely considered to be one of the founders of the study of S&T policy in the field of contemporary China studies, summarized the introductory conversation when he observed that, “given the ways in which the political relationship began to unravel a little bit, it makes it much more difficult to think about having intimate kinds of science and technology relationship. One should note that, you know, before the Trump administration, we had already reached the point where the S&T relationship was very, very dense, very, very intensive as measured by government-to-government agreements, corporate investments, and R&D activities and transfer.”

The microphone then passed to Paul Triolo, senior expert in the Eurasia Group with extensive knowledge on China's rise as a science and technology (S&T) and cyber power. He remarked on how “the whole the landscape has changed fundamentally by both the rise of Chinese technology companies and then the rise of the digital economy in cyberspace. So that, suddenly, having companies that are competing in the digital economy is a huge issue and that brings along with it all these national security concerns that we've seen.”

Simon proceeded to the question of intellectual property, a particular area of Mark Cohen’s expertise as the director of the Berkeley Center for Law and Technology’s Asia IP project. He noted that the question requires a nuanced response as it touches on a diverse array of rights and concerns that span legal systems between the two countries. Nevertheless, he believes that “on balance, it’s generally been positive. And I think you’ve seen a dramatic transition in the past five to fifteen years, perhaps, in China’s IP environment.”

All of the panelists agreed that understanding the context of any question related to U.S.-China relations is important. As Suttmeier stated, “I kind of like one of the points that Dalio made about not always applying Western metrics to all of this. You really have to, I think, get into the Chinese context, much more than we often do, when we talk about China’s innovation.” In a reflection essay, Sanya Uppal, an Economics and Classics major, concurred, observing that "foreign perceptions of China have changed quickly, but China has always had a long-term process of development in mind. Western metrics are not the best to describe this; understanding China’s innovation in its own context is necessary."

Next, the conversation turned to an evaluation of diversifying supply chains as a means of hedging against bilateral disruptions in trade that are highly damaging to businesses. However, this is also not an easy process. Cohen pointed out that “companies are looking at more resilient supply chains. The Trump tariffs have imposed high costs and a sense of risk associated with China, but China is extremely hard to replace.” Triolo agreed, stating that it is “very difficult to design China out of your manufacturing supply chain,” despite the emergence and growth of regional competitors such as Vietnam, India, Thailand, and Indonesia.

Finally, the group examined the political dimensions of the question, particularly as the U.S. is in a presidential election year. The group looked at the implications of a Biden administration for S&T cooperation between the U.S. and China, with Simon expressing the hope that the future relationship would consist of “more coherence and greater logic connecting all the pieces together.”

Watch a video of the local APSI & DUCIGS webinar on China-U.S. S&T cooperation and engagement:

Watch the keynote portion with Ray Dalio and Stephen A. Orlins: