Intimate Communities: Wartime Healthcare and the Birth of Modern China, 1937-1945

Asking big questions and distilling the answers into an approachable narrative is a rewarding part of the scholar's job. No stranger to this work, Nicole Barnes, Assistant Professor of History at Duke University, delivered a riveting presentation on October 30 at the John Hope Franklin Center. The subject was her newest book, Intimate Communities: Wartime Healthcare and the Birth of Modern China, 1937-1945. The talk was sponsored by APSI as part of Wednesdays @ the Center, a weekly lecture series in which presenters speak informally about their work in conversation with an audience of students, professionals, and community members. 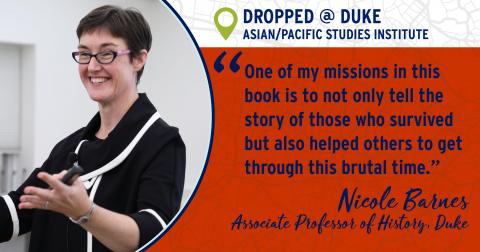 The premise of Barnes' book is that the origin of the community ties that made post-1949 communist China a viable state was the nursing and nurturing provided by female nurses during the war of resistance. By July 1937, China's armed resistance to the Japanese invasion had ignited a nationwide health crisis that mirrored and ultimately amplified profound social changes simultaneously taking place around the country. Yet, despite the devastation of World War II, Chinese society emerged from this ordeal with a cohesive, functional order that served as a stable foundation for the general populace during the period of postwar upheaval and ongoing internal political strife between the nationalist and communist forces.

For Barnes, an interesting puzzle was how the status of women in late-imperial China and post-1949 China has been fairly well studied, leaving a nearly 15-year gap. The genesis of this particular project was the "missing" history of women - between start of war in 1937 and the "iron women" propaganda campaign of the 1950s and 60s which showed women working in traditionally male occupations such as welding. Through innovative and extensive archival research, Barnes presents the case that women who worked as military and civilian nurses, doctors, and midwives during this turbulent period of WWII created personal emotional bonds with soldiers and civilians that surmounted traditional social divides. As Barnes described it, "This was a new gender politics moving in from another part of China." Although the majority of Chinese people at the time were illiterate farmers who had little connection to educated elites' lofty conceptions of nationalism, the trauma of war created a historical moment where professional women made intimate connections that built a national community. The female healthcare workers "chose to go the route of public health where they could serve the people," traveling alongside their charges as they evacuated from coastal cities to inland strongholds under near-constant bombardment by Japanese imperial forces.

Although, as Barnes noted, "we can never know, as historians, what the emotional state was of people who are long dead," the legacy of "an army of young women who were willing to do this virtually unpaid work" of caring for injured soldiers and civilians casts light on the ways in which was reshaped modern Chinese society, breaking down social barriers of class, gender, and language. Or, as Barnes put it, "Instead of being defined by citizens' relationship to the state, I envision community as people's relationships to each other." Barnes acknowledged that the precise mechanisms of this transition can appear complex upon first approach. "They seem like big, huge questions until we put women in the center. Then, the answers fall into place like dominoes." This female-centric perspective also informs our understanding of the profound changes that were taking place during this upheaval and set the stage for further changes: "You wouldn't have had 'iron women' if women themselves had not liberated themselves and inserted themselves into a patriarchal system."

Barnes' research primarily focuses on public health and medicine in twentieth-century China from a gendered perspective, incorporating the changing life stories of men and women into her analysis of how health regulations and medical practices reflect modern Chinese society’s principal values as well as the assumptions and political goals of state actors.