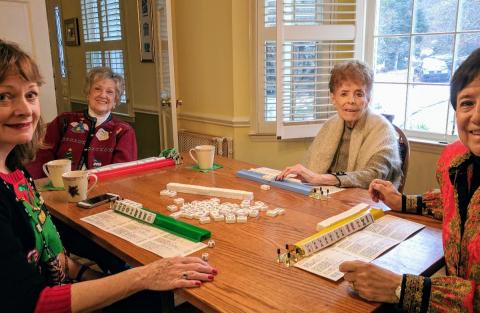 Mavis Mayer (second from right) playing mahjong with friends in 2018.

It is with sadness that we share the news that Mavis Mayer, who was the first coordinator for Asian/Pacific Studies Institute at Duke, died on February 6, 2020 from complications after a fall.

Mavis managed APSI effectively and creatively during an inaugural period in the 1980s, when APSI lived with a democratic structure based on collective leadership, until Nan Lin was recruited to Duke to become APSI’s Director in 1990.

She had wise entrepreneurial instincts, learning fast whom to contact to get things done and how to get through newly created bureaucratic hoops as the university expanded its international programs. She sought out funding opportunities and encouraged and promoted international student exchanges. She protected APSI’s core funding so that APSI would not overspend and sputter out as some earlier area studies programs at Duke had done.

Mavis made APSI into an effective administrative center for collaborative activities within Duke and also joint programs with UNC and NCSU, like the Triangle East Asia Colloquium, helping those projects and organizations to endure. Along with her beloved Sister Cities program for the City of Durham, she took APSI to heart and became its heart for many years, retiring in 2002.

We will always remember her fondly, for her institutional creativity, energy, and deep devotion to APSI and Duke.