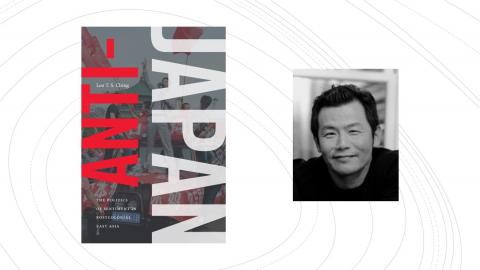 Congratulations to Prof. Leo Ching, Associate Professor of Asian & Middle Eastern Studies, on the publication of his latest book, Anti-Japan: The Politics of Sentiment in Postcolonial East Asia (Duke University Press, 2019). Extensively researched, this important new work examines the origins and pervasiveness of modern negative attitudes toward Japan in three of its former occupied territories, China, Korea, and Taiwan.

From the publisher: "Drawing on a mix of literature, film, testimonies, and popular culture, Ching shows how anti-Japanism stems from the failed efforts at decolonization and reconciliation, the Cold War and the ongoing U.S. military presence, and shifting geopolitical and economic conditions in the region. At the same time, pro-Japan sentiments in Taiwan reveal a Taiwanese desire to recoup that which was lost after the Japanese empire fell. Anti-Japanism, Ching contends, is less about Japan itself than it is about the real and imagined relationships between it and China, Korea, and Taiwan. Advocating for forms of healing that do not depend on state-based diplomacy, Ching suggests that reconciliation requires that Japan acknowledge and take responsibility for its imperial history."

Prof. Ching will give a related talk on Friday, November 1. In the presentation, he will explore how the "new" Great Game suggests that, like the imperial competition of the past, we are witnessing a trans-imperial moment whereby Japan and China are vying for hegemony in East Asia. This is a new moment because East Asia, unlike Europe, has never had two co-existing superpowers. The prospect of a new imperial competition is complicated by the still-present American military power and the non-statist arena, especially in popular culture, where the imperial games are played out. Using one of the popular anti-Japanese video games, Glorious Mission Online (2013) as a case study, Ching will argue the game is symptomatic of the relations between warfare and game in general. He will then outline the trend in game development that subverts conventional war games and propose an alternative game design over the disputed territories in the Southern China Sea that prioritize ecology over human conflict and development.