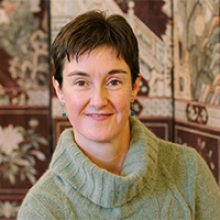 Congratulations to Nicole Barnes, Associate Professor of History at Duke and one of APSI's core faculty, on winning the Joan Kelly Memorial Prize for her new book, Intimate Communities: Wartime Healthcare and he Birth of Modern China, 1937-1945 (University of California Press, 2018).

The prize is awarded annually by the American Historical Association for "the book in women's history and/or feminist theory that best reflects the high intellectual and scholarly ideals exemplified by the life and work of Joan Kelly (1928–82)."

The book examines the events that took place after China’s War of Resistance against Japan that began in July 1937 and sparked an immediate health crisis throughout the country. Prof. Barnes compellingly makes the case that women who worked as military and civilian nurses, doctors, and midwives during this turbulent period built the new national community that emerged after the trauma, one relationship at a time.

On winning the award, Prof. Barnes commented “I am especially humbled to have a prize bearing the name of Joan Kelly. As a scholar in women's history and gender studies, I am keenly aware that I wouldn't even be able to do the work that I do had not many brave and brilliant souls blazed the path for us.”

Feedback about the book: "Intimate Communities is not only a major contribution to the histories of medicine, gender, emotion, and nationalism, but even more importantly, it opens up exciting horizons by making visible and exploring the surprising entanglements between them all."—Sean Hsiang-lin Lei, author of Neither Donkey nor Horse: Medicine in the Struggle over China’s Modernity