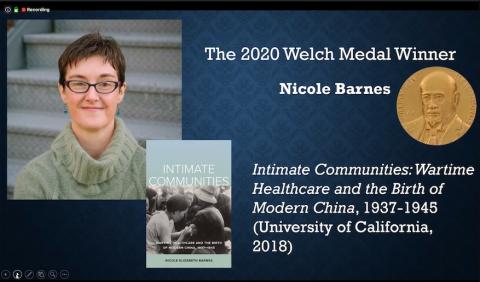 Congratulations to Prof. Nicole Barnes on being named the 2020 recipient of the William H. Welch Medal, an award given by the American Association of the History of Medicine recognizing "a book of outstanding scholarly merit in the field of medical history published during the last five years." The awards were announced at a virtual business meeting of the AAHM on May 9.

Prof. Barnes' book, Intimate Communities: Wartime Healthcare and the Birth of Modern China, 1937-1945 (University of California, 2018) is available for purchase as well as at no cost download via Luminos.

Read the announcement by the Duke Department of History>>

About the book: When China’s War of Resistance against Japan began in July 1937, it sparked an immediate health crisis throughout China. In the end, China not only survived the war but emerged from the trauma with a more cohesive population. Intimate Communities argues that women who worked as military and civilian nurses, doctors, and midwives during this turbulent period built the national community, one relationship at a time. In a country with a majority illiterate, agricultural population that could not relate to urban elites’ conceptualization of nationalism, these women used their work of healing to create emotional bonds with soldiers and civilians from across the country. These bonds transcended the divides of social class, region, gender, and language. (from the publisher)