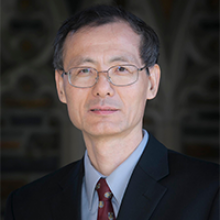 In April 2020, Duke University announced that Prof. Xi Lian would be named the David C. Steinmetz Distinguished Professor of World Christianity, effective July 1. He is one of 29 Duke faculty named to distinguished professorships from eight colleges and schools at the university.

Although the celebratory dinner has been postponed until a later date, Provost Sally Kornbluth is "thrilled to honor this wonderful cohort of scholars, teachers, and members of the Duke community.”