Scholars Offer Perspective on the Challenge of China in the World 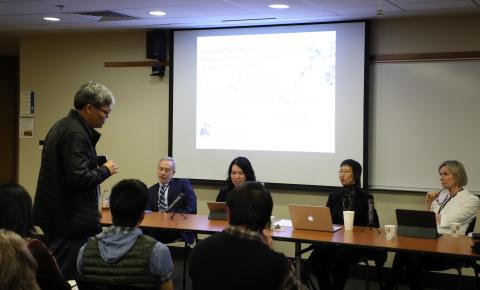 As China has grown in power and stature as the second largest economy in the world, a dominant trading partner, and a world power, its interests have also grown global. Many issues of Chinese domestic politics are now also truly issues of global politics. In the politically charged atmosphere that now characterizes U.S.-China relations, the need for rigorous, objective, and engaged scholarship is more critical than ever.

To this end, four distinguished China scholars, Melanie Manion (Duke), Songying Fang (Rice), M. Taylor Fravel (MIT), and Jessica Chen Weiss (Cornell), shared a summary of their past and current research, offering perspective on what it takes and means to "get China right" amid the challenge of China's changing and dynamic role in the world. At the conclusion of their remarks, audience members were invited to contribute their own views as well as to ask questions of the panelists and one another.

This public talk on the evening of December 6 was part of a conference that brought together more than 50 academics representing a broad modern spectrum of substantive expertise in China politics. The goal of the conference was to forge a connection between scholars whose research focuses on domestic Chinese politics and those who take China’s global role as their point of departure. Such a dialogue occurs rarely, but negative and dangerous responses to China’s global role require the two communities to better understand the strengths and weaknesses in their collective knowledge. The conference strives to connect scholarly knowledge about Chinese politics with the public discourse and public policy, so as to develop, from an existing strong foundation of relevant scholarship, the appropriate expertise and capacity to bring evidence and perspective to bear on important questions about China and its role as a new global power.

The event was supported by a grant from the Henry Luce Foundation and the following units at Duke University: Office of the Provost; Dean’s Office, Trinity College of Arts and Sciences; Asian/Pacific Studies Institute; Center for International and Global Studies; Global Asia Initiative; Department of Political Science. The conference was co-organized by: Mary Gallagher (University of Michigan), Melanie Manion (Duke), Jean Oi (Stanford), Elizabeth Perry (Harvard), and Lily Tsai (MIT).