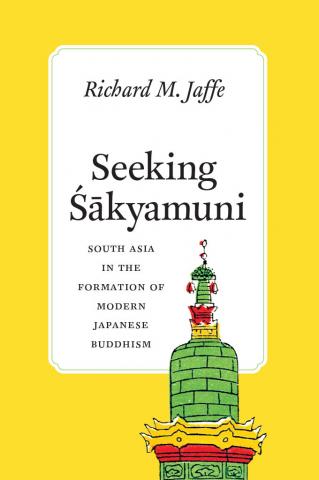 Congratulations to APSI Director Richard Jaffe on the publication of his newest book exploring the connections between Japanese and South and Southeast Asian Buddhists, Seeking Śākyamuni: South Asia in the Formation of Modern Japanese Buddhism. In addition to his role as the APSI Director, Jaffe is a Professor of Religious Studies, Trinity College, Duke University.

From the publisher: Though fascinated with the land of their tradition’s birth, virtually no Japanese Buddhists visited the Indian subcontinent before the nineteenth century. In the richly illustrated Seeking Śākyamuni, Richard M. Jaffe reveals the experiences of the first Japanese Buddhists who traveled to South Asia in search of Buddhist knowledge beginning in 1873. Analyzing the impact of these voyages on Japanese conceptions of Buddhism, he argues that South Asia developed into a pivotal nexus for the development of twentieth-century Japanese Buddhism. Jaffe shows that Japan’s growing economic ties to the subcontinent following World War I fostered even more Japanese pilgrimage and study at Buddhism’s foundational sites. Tracking the Japanese travelers who returned home, as well as South Asians who visited Japan, Jaffe describes how the resulting flows of knowledge, personal connections, linguistic expertise, and material artifacts of South and Southeast Asian Buddhism instantiated the growing popular consciousness of Buddhism as a pan-Asian tradition—in the heart of Japan.

What reviewers are saying:

Ramachandra Guha, author of India After Gandhi
"In this superb book of transnational history, Richard Jaffe uncovers the role that South Asia played in the shaping of modern Japanese Buddhism. Using a wide array of primary sources, he brings to light the forgotten stories of those scholars and seekers who make arduous journeys across the oceans, seeking the traces of the Buddha in the land of his birth. Seeking Śākyamuni is a landmark work of scholarship: rigorously researched, sharply analyzed, and beautifully written. It richly illuminates the religious and intellectual history of Asia, the world’s most populous and most prosperous continent."
Anne Blackburn, Cornell University

"Seeking Śākyamuni will entice and reward readers working on many corners of the Buddhist world. Revealing a 19th- and 20th-century history of complex Buddhist, commercial, and political networks and entanglements within and beyond Asia, Jaffe teaches us much about the more recent history of Japanese Buddhism. Simultaneously, he reveals the central role of intra-Asian engagements in the creation of new modes of Buddhist organization and expression in Japan as well as India, Sri Lanka, Burma and Thailand. Richard Jaffe's longstanding interest in Buddhist objects and aesthetic forms greatly enriches this study, reminding scholars of modern Buddhism not to neglect the changing visual and spatial arguments that reflected and shaped Japanese Buddhist mobility in Asia."

James Dobbins, Oberlin College
"Japanese Buddhism, like all religions, confronted a rapidly changing world in the nineteenth and early twentieth centuries, and had to remake itself in order to survive. The prevailing view has been that it did so by appropriating European models of religious learning and practice. Seeking Śākyamuni offers an important corrective to this view, demonstrating that South Asia—India, Sri Lanka, and Southeast Asia—loomed large in Japan’s new construction of Buddhism. Through thick description of Japanese scholar-priests residing long-term in South Asia, of wealthy Japanese tourists making “pilgrimages” to India’s Buddhist sites, of Japanese architectural innovations gesturing to Indian  motifs, of  South Asian monks participating in Japanese scholarly enterprises, and of much more, Jaffe shows that India left a visible imprint on Japan’s new Buddhism. This was not the result of a one-way transfer of religious culture in any particular direction. Rather, it was part of the creation of many modern Buddhisms out of cultural flows from East Asia, South Asia, and the West, which were 'entangled, circulatory, and inter-crossing.'"
Steve Heine, Florida International University
"An exceptionally well-researched and insightfully presented account of Japanese Buddhist travelers to South Asia during the late nineteenth and twentieth centuries, as well as the overall reception and impact of Indian Buddhism on the understanding and production of Japanese Buddhist temples, texts, and various aspects of intellectual and material culture in the modern period."