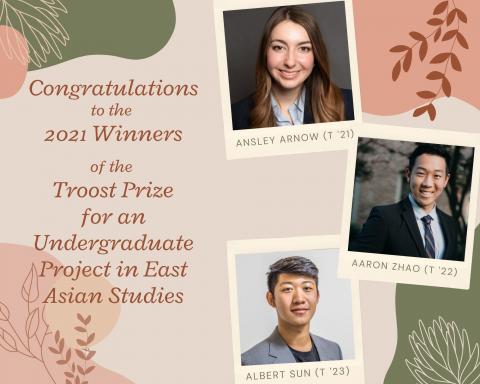 The first Kristina Troost Prize for an Undergraduate Project in East Asian Studies was awarded in May 2021 to three Duke undergraduates for two projects.

Ansley Arnow (Trinity '21) won for her honors thesis, “Transnational Japonisme: Representing Women and the Female Body.” Japonisme refers to a transnational area of scholarly inquiry connected with East Asian Studies that relates East Asia (specifically Japan) to Euro-American and World Art History. The committee members were uniformly impressed by the quality of scholarship and writing. In particular, they felt the project provided a fine analysis of the paintings of a range of American and European painters, demonstrating how Japonisme affected female portrait painting transnationally in the late-nineteenth century. One reviewer noted the thesis was "well-researched, and well-written; I learned things and saw Japonisme through a new lens." The project was developed under the supervision of Gennifer Weisenfeld, Professor in the Department of Art, Art History and Visual Studies.

Aaron Zhao (Trinity '22) and Albert Sun (Trinity '23) received the prize for their documentary film, “The Dream That Wasn't 亦梦非梦.” The committee remarked in particular on the quality of the film and the poignant manner in which this short documentary portrays the struggles of one Chinese immigrant family to realize their dream of owning their own restaurant in the midst of the Covid-19 pandemic. One committee member commented, that the film "is moving and interesting. I like the fact that it is not a standard research paper. I have encouraged students and staff ... to experiment with new technologies. The video format is more effective than a paper would have been, in my opinion. I also liked seeing the behind the scenes in the kitchen." Given the collaborative nature of the work, the second award was granted to both Zhao (the writer, director, and producer) and Sun (the assistant producer). The project was completed as part of the coursework for Chinese 331 (Media China), taught by Tianshu He, lecturer and coordinator for First Year Chinese lanugage.

APSI Director Richard Jaffe, Professor of Religious Studies, congratulated all of the awardees, noting the strong ways in which these projects advance Asian Studies in their respective academic fields.

The purpose of the Kristina Troost Prize is to recognize the best undergraduate project in East Asian Studies at Duke each year. The project can be in the form of a substantial paper, visual art, film, or digital production, among others. The prize will be awarded annually in the spring semester following review by an APSI faculty committee. It honors the work and legacy of Dr. Kristina Kade Troost, who had a distinguished career spanning 30 years at Duke. A historian by training, Dr. Troost was Duke’s first Japanese Studies Librarian and worked diligently to expand the resources for scholars of Asia. She headed the International and Area Studies Department in the Library for 20 years. She also served many years as the much-beloved Director of Graduate Studies for Duke’s MA program in East Asian Studies. Although Dr. Troost has retired from Duke, she remains actively engaged in the academic community, especially the Triangle Forum for Japanese Studies. Through her various roles, she has made numerous and invaluable contributions to East Asian Studies at Duke and beyond.

Watch The Dream That Wasn't 亦梦非梦: